We really had no idea what to expect.  We were headed from Ohio to east Texas (1449 mile trip) where our winter workamping job would be and looked for places to stay along the way.

We had just been to the Branson, MO area where we stayed at the Escapees RV Club Turkey Creek RV Park.  We spent a couple nights there enjoyed a great pizza dinner at “Mr. G’s” and then of course (since you’re in Branson) took in one of the shows on the strip.

So we looked at the map and decided that Hot Springs, Arkansas is where we should be heading.  I read the reviews online and found that the Lake Catherine State Park was reviewed as being a nicer campground than the National Park, so off went went.  We were not disappointed!

Lake Catherine was beautiful.  The day we got there, it was super hot and humid so once we got things hooked up, we changed into our suits and jumped into the lake to cool off … how refreshing!  Later that evening we could sit out and watch the ducks and geese along the edge of the lake along with hearing the screams of joy from the children jumping into the water from the adjacent dock.  We’ll definitely be stopping back at Lake Catherine State Park next time we find ourselves in the Little Rock / Hot Springs area.

We stayed at Lake Catherine SP for two nights because we wanted to spend time in Hot Springs.  We really had no idea what to expect.  I looked online (again) and found the National Park site told us that (depending on how much time we had) what we could see in; an hour or so, a half day, or a whole day.  We headed to downtown Hot Springs to hit the Visitor Center and pick up a map.

“Bathhouse Row” is where you’ll find 8 of the early hot spring bath houses built between 1892 and 1923 still standing and two of them actually still in operation.  The ones that are not still operating have become museums, gift shops, etc. 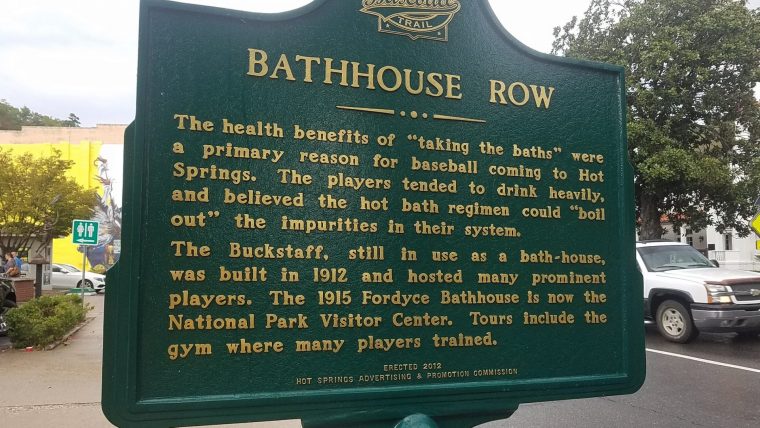 The spring water comes out of the ground at 143 degrees, (over 700,000 gallons a week!) and is collected at the base of the mountain just above Bathhouse Row into spring collection boxes.  You can see these boxes along side the Promenade that runs just along behind the bathhouses.

The Fordyce Bathhouse was built between 1914-1916 and is now a museum that provides free guided tours.  Park Ranger Kevin was our tour guide and he showed us all the rooms used along with a lot of the equipment used for treatment of the aches and pains of the patients.  Although some of the standard hot water bathing could be taken in by anyone, there were other treatment regimes that had to be prescribed by a medical doctor.  The Fordyce doctor was on the 3rd floor and patients could see him for an exam and interview after which the doctor could prescribe a treatment program for that patients ailment(s).

Upon entry, patients were assigned an attendant who would be with them throughout their visit.  This was for the safety of the patient to make sure they weren’t “overdoing it” and to make sure all the proper procedures were followed and laws and regulations controlling hot springs baths were (are) followed.

Kevin told us that the attendants, although paid a very small wage, were often tipped very well by their patients.  If an attendant was good at their job, it was very often the case that the patient would request that attendant by name when they set their appointment.  It was also very common to find that there were families of attendants, generation after generation.  For local folks, although the work was hard (on your feet all day in sweltering heat and humidity), the tips were good and the work was steady.

Some of the equipment was pretty scary looking (electro-therapy, needle showers, heat-lamp boxes, ice block boxes, spring water enema table, etc.)  Yet, people in need flocked to the bathhouses seeking relief from their pain.  Remember, there were not the pharmaceuticals that are out there now and medical technology was still in the dark ages.

We also took a drive up “Mountain Road” where we were able to take an elevator up to the top of the lookout tower where you could see all over town and for miles beyond.

We had a great time, learned a lot and would definitely go back again to both the state park campground and the downtown area of Hot Springs.

Like Loading...
We’d really appreciate it if you would do us the favor of helping us continue to publish this RV / Travel / Workamping blog. Do you purchase any products from Amazon? If you do, it would be great if you’d use the link in the sidebar or one of the links below to get to Amazon … after that you can change your search. By making your Amazon purchases from our site, we will receive from Amazon a small percentage of your purchase and it doesn’t cost you any more. We’d really appreciate your help. Thank you, Herb & Kathy
NOTE: We are a participant in the Amazon Services LLC Associates Program, an affiliate advertising program designed to provide a means for us to earn fees by linking to Amazon.com and affiliated sites.

Support Our Blog For Free

Clicking this (or any of the Amazon links on this site) will take you directly to YOUR Amazon account where you can browse and purchase any product(s). Ordering your Amazon products this way will not cost you any more and it will provide us a small commission that allows us to continue to travel and write this blog sharing our experiences. Thank you for your continued support.

herbnkathy’s “Go To” site for everything RV travel. Check it out by clicking the link below.