One of the benefits of attending the Dayton Amateur Radio Association “HamVention” every year is to spend time with my long-time (notice I didn’t say “old”) friends.  Dave, Ed, and I grew up together in the 60’s in Redford Township, Michigan – a western suburb of Detroit.  We played together, we rode bikes together, we got in trouble together and we attended school together (since the 2nd grade) and we also got our ham radio licenses together – all first licensed in 1969.

This year at HamVention we decided we’d like to take a trip away from the main venue and visit the site of the Bethany Transmitting Station of the world famous Voice Of America (VOA) located just off I-75 between Dayton and Cincinnati.

The VOA Bethany Relay Station was designed by the Crosley Broadcasting Corporation.  Although the actual recording studios were in New York City and later moved to Washington, D.C., the signals were relayed through dedicated AT&T long distance telephone lines to the transmitter site near Cincinnati.

Allstays - Our favorite "go to" to find great camping/parking spots 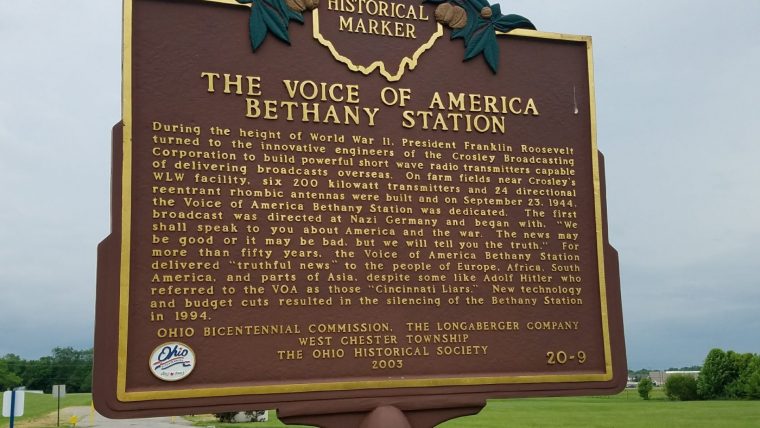 The VOA began in 1942 as a radio program designed to explain America’s policies during World War II and to bolster the morale of its allies throughout Europe, Asia, the Middle East, and Africa. After the war, VOA continued as part of America’s Cold War propaganda arsenal and was primarily directed toward the western European audience. In February 1947, VOA began its first Russian-language broadcasts into the Soviet Union.

With the words, “Hello! This is New York calling,” the U.S. Voice of America (VOA) begins its first radio broadcasts to the Soviet Union. The VOA effort was an important part of America’s propaganda campaign against the Soviet Union during the Cold War.

The initial broadcast explained that VOA was going to “give listeners in the USSR a picture of life in America.” News stories, human-interest features, and music comprised the bulk of the programming. The purpose was to give the Russian audience the “pure and unadulterated truth” about life outside the USSR. Voice of America hoped that this would “broaden the bases of understanding and friendship between the Russian and American people.”

The Bethany site encompassed hundreds of acres of land for the huge rhombic antenna farm that could be switched to direct the 1.2 million watts of radio frequency programming to different locations around the world, depending on the time of day and atmospheric conditions.

One of the large switching systems for the various transmitters

The room where the electric power came into the transmitting building

One of the six transmitting tubes that created the 1.2 million watts of RF

The base of the antenna switch network out in the field

In one of the pictures above you can see my friend Dave talking to the last remaining employee of the VOA at this site — Dave’s getting quite a history lesson.

Note the windows at the top of the tower in the first picture – It kind of looks like an airport control tower.  I asked our tour guide the purpose of that tower.  His response … “for sharpshooters”.  This Bethany Relay Station was specifically placed here because of it’s distance from the east coast stations where they could be more susceptible to enemy attack.  Even though the Bethany Station was so far west, they still stationed military armed personnel to protect the Voice Of America to make sure the message always got out.

Due to new satellite and internet technology, the need for the high power RF radio broadcast stations has diminished and the station was closed as an active transmitting site in 1994.  Fear not however as the Voice Of America still broadcasts every day from their studios in Washington D.C. and their programming can be heard on the internet and on some local PBS network stations around the country.  Find out more and listen to VOA live at https://www.voanews.com/

And thanks to dedicated volunteers, we were able to tour the museum.  Take a look at the pictures below.

One of the ham radio club operating stations

Some of the early Crosley Co. products on display in the museum

View from the rear of the VOA Bethany Station

Front lobby of VOA – my buddy Dave in the foreground and Ed at the top of the stairs.

We’d really appreciate it if you would do us the favor of helping us continue to publish this RV / Travel / Workamping blog. Do you purchase any products from Amazon? If you do, it would be great if you’d use the link in the sidebar or one of the links below to get to Amazon … after that you can change your search. By making your Amazon purchases from our site, we will receive from Amazon a small percentage of your purchase and it doesn’t cost you any more. We’d really appreciate your help. Thank you, Herb & Kathy

4 thoughts on “Our Visit to the “Voice Of America””

I'm curious ... what are your thoughts on this? Cancel reply

NOTE: We are a participant in the Amazon Services LLC Associates Program, an affiliate advertising program designed to provide a means for us to earn fees by linking to Amazon.com and affiliated sites.

Receive Next Day Shipping on select orders $35+ at Walmart.com

Support Our Blog For Free

Clicking this (or any of the Amazon links on this site) will take you directly to YOUR Amazon account where you can browse and purchase any product(s). Ordering your Amazon products this way will not cost you any more and it will provide us a small commission that allows us to continue to travel and write this blog sharing our experiences. Thank you for your continued support.

herbnkathy’s “Go To” site for everything RV travel. Check it out by clicking the link below.